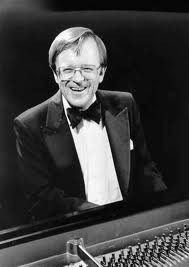 John Livingston Eaton (born May 29, 1934 in Washington, D.C.) is a musician, historian, educator and interpreter of jazz and American popular music. He graduated from Yale University, where he was a member of literary society St. Anthony Hall. Named to the Steinway Concert Artist roster in 1988, Eaton has performed as headliner in the East Room of the White House, and both as soloist and with artists as Zoot Sims, Benny Carter, Clark Terry, and Wild Bill Davison. He has been a featured player at the Kool Jazz Festival and the Smithsonian Institution Performing Arts Jazz series, broadcast nationally on National Public Radio and Radio Smithsonian. He graduated from Yale University in 1956.