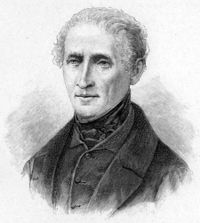 Joseph Freiherr von Eichendorff (10 March 1788 – 26 November 1857) was a German poet, novelist, playwright, literary critic, translator, and anthologist. Eichendorff was one of the major writers and critics of Romanticism Ever since their publication and up to the present day, some of his works have been very popular in Germany.Many of Eichendorff's poems were first published as integral parts of his novellas and stories, where they are often performed in song by one of the protagonists. The novella Good-For-Nothing alone contains 54 poems.