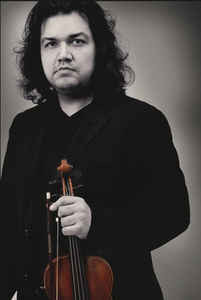 Jozsef Lendvay (born 1974) is a Hungarian violinist. Born in Budapest, Hungary, son of famed Gypsy Violinist József (Csócsi) Lendvay, Sr. attended Béla Bartók Conservatory in Budapest, where he studied with Miklos Szenthelyi and later the Franz Liszt Academy of Music in Budapest. His recordings include works by Sarasate and Brahms' Hungarian Dances with Iván Fischer and he appears on various labels, including a compilation by Sony BMG featuring Lendvay next to Itzhak Perlman, Isaac Stern, Joshua Bell, among others. Lendvay has won first prize at the Koln International Violin Competition, the Ferenc Liszt Heritage Award presented by Hungary's Ministry of National Culture, and the Tibor Varga International Violin competition, among others. In 2002 he was awarded the Golden Cross for his musical contributions by the president of the Hungarian Republic.