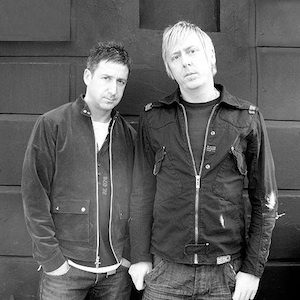 House producers from Wrexham, North Wales. Recording at their own studio The Pharmacy. K-Klass began with Carl & Andy recording as Interstate and supporting 808 State on tour. After seeing them in Chester, and the following week at the Hacienda, Russ & Paul spent the night partying with them before going back to Andy's house to look at his studio equipment. All four of them began recording together, and took the demo tape containing 4 tracks into Eastern Bloc, who promptly signed them (the Wildlife EP). Prior to signing for Deconstruction they were managed by James Barton and Andy Carroll @ Diesel Management , Liverpool . Manager: Bas Jansen bas [at] wearekklass [dot] com

Let Me Show You - Klub Mix on Universal by K-Klass

So Young - K-Klass Remix; 2007 Remaster on Dreams - The Ultimate Corrs Collection by The Corrs

Rhythm Is a Mystery - Remix on The Remixes by K-Klass

Hate That I Love You - K-Klassic on Good Girl Gone Bad: The Remixes by Rihanna