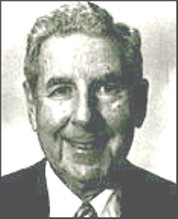 American lyricist and producer (Philadelphia, Pennsylvania, May 6, 1917 - ✝ Pompano Beach, Florida, November 28, 2001). His most known songs include Butterfly, Teddy Bear, Limbo Rock, Wild One, The Cha-Cha-Cha, Fabulous, Let's Twist Again, which won the Grammy for best Pop Song of the year. Founder with Bernie Lowe of the Cameo Parkway Records in 1956, creating a team, even with Dave Appell, of prolific and successful songwriters.