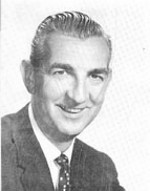 Ken Darby (born: May 13, 1909 Hebron, NE - died: January 24, 1992 in Sherman Oaks, California.) was an Academy Award and Grammy Award winning American composer, vocal arranger, conductor, choral director, singer and author. He has shared in winning an Oscar three times for The King and I (1956), Porgy and Bess (1959) and Camelot (1967) and was nominated for three others: South Pacific (1958), Flower Drum Song (1961) and How the West Was Won (1963). He shared a Grammy Award with André Previn for Porgy and Bess (1959). Highlights of his career include: his choral group, The Ken Darby Singers, singing backup for Bing Crosby on the original 1942 Decca Records studio recording of "White Christmas"; composer and production supervisor for Walt Disney Studios; choral and vocal director on the 1946 Disney film classic, Song of the South; associate producer of many record albums; vocal coach for Marilyn Monroe for Gentlemen Prefer Blondes (1953) and There's No Business Like Show Business (1954); composed the Elvis Presley hit "Love Me Tender" (he signed the rights over to his wife, Vera Matson, whose name appears as co-lyricist with Elvis Presley for royalty purposes).

Bidin' My Time (from "Girl Crazy") - 2022 Remaster on Judy Garland: Recordings from the M-G-M Films by Judy Garland

To You Sweetheart, Aloha on Ports Of Paradise by Alfred Newman & Ken Darby