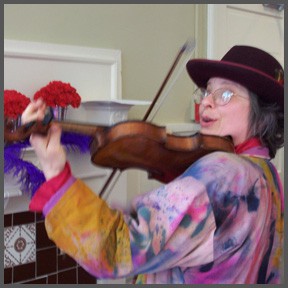 LaDonna Smith (born 1951) is an American avant garde musician from Alabama (U.S.). She is a violinist, violist, and pianist. Since 1974 she has been performing free improvisational music with musicians such as Davey Williams, Gunther Christmann, Anne Lebaron, Derek Bailey, Eugene Chadbourne, Misha Feigin, Michael Evans, David Sait, Jack Wright, John Russell, Sergey Letov, Toshi Makihara, Andrew Dewar and many other of the world's major improvisers. As a performer, she has toured the USA, Canada, Europe, including Russia and Siberia, China and Japan. Her music is documented on dozens of CD and LP recordings, including the obscure Say Daybew Records - of Fred Lane & the Debonaires. An active organizer, she produced numerous concerts in Alabama and the Southeast, including the Birmingham Impr

Secrets and Mirrors on Yearbook Vol. 3 by Various Artists

Roll Up the Screen on The Bird Returns to the Forest by Henry Kaiser, LaDonna Smith & Davey Williams

The Compass on The Bird Returns to the Forest by Henry Kaiser, LaDonna Smith & Davey Williams

A Mysterious Vision on Buddy Systems by Gino Robair

The Alert Cat Catches the Mouse on The Bird Returns to the Forest by Henry Kaiser, LaDonna Smith & Davey Williams

Summer Wind, No Sleep on They Are We Are by Misha Feigin, Craig Hultgren & LaDonna Smith

The Rhinoceros Gazing at the Moon on The Bird Returns to the Forest by Henry Kaiser, LaDonna Smith & Davey Williams