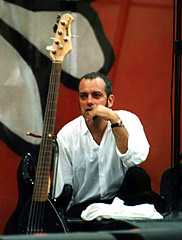 Larry Klein (born 1956) is an American musician, songwriter, record and soundtrack producer and head of Strange Cargo, an imprint with Universal Music Group.Klein began his career as a bassist, playing with jazz artists Willie Bobo and Freddie Hubbard. He went on to perform with other jazz artists such as Carmen McRae, Joe Henderson, Bobby Hutcherson, Wayne Shorter, Herbie Hancock, Bobby McFerrin, and Dianne Reeves. As a bass player he has worked with artists such as Bob Dylan, Robbie Robertson, Peter Gabriel, Don Henley, Lindsey Buckingham, and Randy Newman.