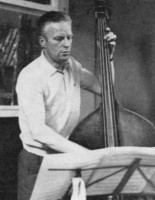 Leonard Walter "Lennie" Bush (June 6, 1927, London – June 15, 2004) was an English jazz double-bassist.Bush contracted polio as a child and as a result possessed a limp for the rest of his life. He played violin before switching to bass at 16, and was playing professionally by 17 in a variety show called The Rolling Stones and Dawn.He played with Nat Gonella in the middle of the 1940s, but turned to bebop later in the decade. He was one of the founding members of London's Club Eleven, and played there in a band with Ronnie Scott, Hank Shaw, Tommy Pollard, and Tony Crombie.

Soho Blues on Live At the Flamingo by Various Artists

Night in Tunisia on Jazz from London 1957 by Various Artists

Annie-mation on Live At the Flamingo by Various Artists

Straight Away on Meat's Too High - Blues, Boogie & Bebop by Eddie "Cleanhead" Vinson

Laker's Day on Live At the Flamingo by Various Artists