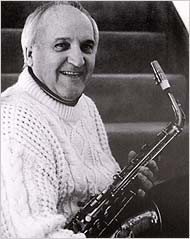 Lew Anderson (May 7, 1922 – May 14, 2006) was an American actor and musician, most famous for being the third and final actor to portray Clarabell the Clown on Howdy Doody between 1954 and 1960. He was also a musician. He famously spoke Clarabell's one and only line on the program on the show's final episode in 1960, with a tear visible in his eye, "Goodbye, kids." Anderson was born in Kirkman, Iowa, the son of a railroad telegrapher. He began playing his sister's clarinet when she tired of it, and by high school had formed his own dance band. After a year in junior college in Fort Dodge, Iowa, he received a music scholarship to Drake University in Des Moines. He attended for two years, but then quit school to begin his professional musical life by accepting a job with the Lee Barron sleeper bus band. During World War II, Anderson served in the United States Navy where he started his first band. After serving in the Navy in World War II, he joined the Carlos Molinas Latin Orchestra, where he also wrote the American dance arrangements. In the late 1940s, he joined The Honey Dreamers, a singing group that appeared on radio and early television shows like The Ed Sullivan Show. While working with the group, he met "Buffalo" Bob Smith who offered him the role on the Howdy Doody show. Anderson again played Clarabell on the short-lived "New Howdy Doody Show" in 1976-1977 and in the 1987 40th anniversary special and made personal appearances as Clarabell with Buffalo Bob for many years thereafter. After his six year stint as Clarabell, he returned to music, and in his later years, played and led the 16-piece Lew Anderson Big Band Friday nights in New York's jazzclub, Birdland. Anderson died in Hawthorne, New York from complications of prostate cancer.