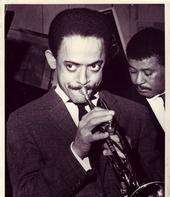 Lonnie Hillyer (March 25, 1940 in Monroe, Georgia – July 1, 1985 in New York City) was an American jazz trumpeter, strongly influenced by Dizzy Gillespie, Charlie Parker, Thelonious Monkand other bebop legends of that era.Lonnie Hillyer moved with his family to Detroit at age three, and began studying music at 14 under Barry Harris. In 1960, he moved to New York, where he played with Charles Mingus, Yusef Lateef, and Clifford Jarvis. Lonnie Hillyer's association with Mingus lasted more than a decade, performing on records such as "My Favorite Quintet" and "Let My Children Hear Music".

Oh Wonder on Hitting the Ground by Gordon Gano