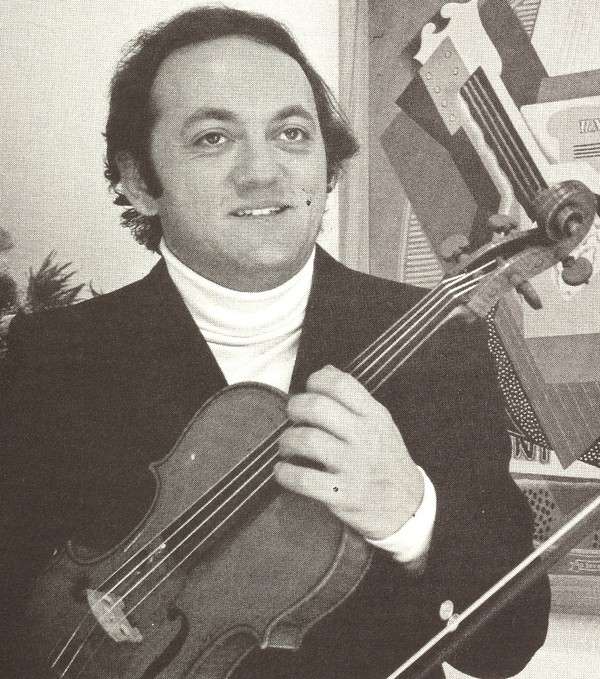 Luigi Alberto Bianchi was an italian virtuoso violist (b. Rimini, 1 January 1945 d. Roma, 3 January 2018). Successful on both viola and violin, Luigi Alberto Bianchi is somewhat unusual amongst internationally-known string players. From a family of musicians, he began violin lessons aged six but it was the viola which won him a Ricordi Scholarship to study at the Rome Collegio di Musica; at his graduation exam, aged nineteen, he performed Bartók’s Viola Concerto. He became principal viola of Rome’s Orchestra Sinfonica della RAI and a member of the Quartetto di Roma, and embarked on a solo career, becoming particularly popular in the UK in the late 1960s. In 1973, as well as being appointed Professor of Viola at the University of Milan, Bianchi was chosen to record Paganini’s Sonata per la gran viola (which he did using a 1595 Amati instrument) for the first time according to the original score, without any changes to simplify demanding passages and without the help of a fifth (E) string. He also recorded Max Reger’s three viola suites and, in 1980, a selection of works with pianist Bruno Canino, just before his beloved Amati was stolen. The theft led Bianchi back to the violin. He bought a 1692 Stradivarius in London and later the 1716 ‘Colossus’ Stradivarius, which was itself subsequently stolen in 1998. Teaching (at institutions across Europe and the USA) and conducting have augmented Bianchi’s activities. He is known as an authority on Paganini and has also written a book on Alessandro Rolla (1757–1841), Paganini’s only teacher. As a signed artist for the Italian Dynamic label, Bianchi has recorded on both viola and violin, often appearing with both instruments on the same disc. His violin playing, demonstrated here in Rota’s Improvviso (1997) and Hummel’s Rondo brillant (1998), is rich and full, superbly accurate and very assertive. On both instruments his tone is characterised by a quite tight, intense vibrato, few portamenti, and an almost percussive approach to staccati, often executed off the string as either spiccato or ricochet in the modern manner. This enlivens Paganini’s Sonata (1973), which is full of typically bright (possibly brash) Paganinian virtuoso textures ably played by Bianchi. His tempo feels a little directionless, and not all of the fiendishly difficult double-stops are well tuned. The viola transcription of the finale of Paganini’s Violin Concerto No. 2 (1980) can sound a little harsh at times, but the command of staccati is truly splendid. Bianchi recorded a notable amount of music by Nino Rota (1911–1979), best known for his film scores. Not all of this is successful—it is written in a derivative neo-Brahmsian idiom—but the Viola Sonata No. 2 (1997) is a wonderfully lyrical piece well displaying Bianchi’s cantabile playing in all its richness. Although a versatile artist, his tone suits some things rather better than others. Sarasate’s Op. 23 Spanish Dances (1973) are delivered with great charisma and Bianchi’s tight vibrato is reminiscent of Sarasate’s own sound; there is a sultry passion here which works well. Ravel’s Rapsodie espagnole (‘Habanera’ movement, recorded 1973) is much more delicate and played a little too slowly perhaps, but certainly very thoughtfully. Bianchi’s performances deliver Reger’s consciously Bach-like textures in a classically-phrased and clean-toned style. The solo Viola Suite No. 1 (1977) begins with a fantastic breadth of tone, whilst the moto perpetuo finale is impressively controlled and always exciting. Overall, Bianchi comes across as a very assertive musical character and a fine string player, equally at home on violin and viola. (c) (p) by Luigi Picardi