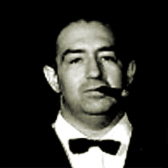 American composer and lyricist, especially of songs for the stage and film. Born: 21 June 1904, Warsaw, Russian Empire (now Poland). Died: 28 February 1959 in New York City, New York, USA (aged 54). He was nominated for the best original song Oscar nine times, including six consecutive years between 1940 and 1945, and won the award once, for "You'll Never Know", which has proved amongst his most enduring and remains popular in films and television commercials. "At Last" is perhaps his most famous song today. Gordon was born in Warsaw and moved to New York City as a child. He appeared as a vaudeville actor and singer in the late 1920s and early 1930s but his songwriting talents were always paramount. He formed a partnership with English pianist Harry Revel that lasted throughout the 1930s. In the 1940s he worked with a string of other composers including Harry Warren (2).

Ain'tcha? on Everything's Made for Love by Annette Hanshaw & Harold Arlen