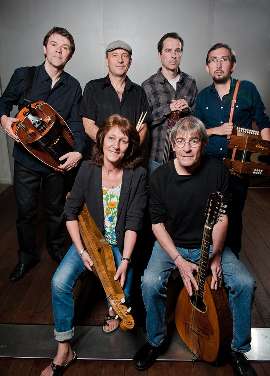 Malicorne is a pioneer French electric folk group founded in 1973 straight after the recording of Gabriel Et Marie Yacoub’s album “Pierre De Grenoble”, sometimes considered as the first album of the band. They split and reformed several times, each time with new line-ups accompanying the founding couple of Gabriel and Marie Yacoub. In 1988 the duo split and Malicorne stopped for good with the promise to “never start again”. However in 2010, Gabriel Yacoub was to play at the Festival Les Francofolies de La Rochelle and invited the other original members of Malicorne for a special one-off concert. This went so well, that Gabriel and Marie (now Sauvet) reconvened as Gabriel Et Marie De Malicorne in November 2011 to perform the Almanach repertoire with new musicians. By September 2012, the band changed its name into Malicorne again, continued to perform live, and announced new recording projects.

Margot on Almanach by Malicorne