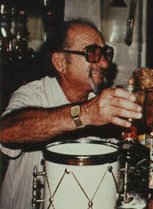 Emmanuel "Manny" Klein (February 4, 1908 – May 31, 1994) was an American jazz trumpeter most associated with swing.He began with Paul Whiteman in 1928 and was active throughout the 1930s playing with several major bands of the era including the Jimmy Dorsey, Tommy Dorsey and Benny Goodman. In 1937, he moved to California and worked with Frank Trumbauer's orchestra. And in early 1940, credited as Mannie Klein, he appears on Artie Shaw And His Orchestra recordings. He also did soundtracks and played trumpet for the film From Here to Eternity, but was uncredited. In addition, Klein worked with musicians associated with West Coast jazz in the 1950s.