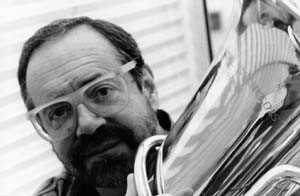 French tuba, trombone and euphonium player, composer, arranger, leader (b. 1935, Cherbourg, France - died in Bessancourt June 27th 2015. After studying the cello and the trombone at the Paris Conservatoire National Supérieur de Musique he went on to play in a number of Big Bands. In the 1960s he accompanied Marlene Dietrich, Nat King Cole, Sammy Davis and Charles Aznavour, and in 1970 added the tuba, working as a studio musician and recording with Michel Legrand, Vladimir Cosma, Michel Colombier and others. From 1973 to 1983 he accompanied Claude Nougaro with Eddie Louiss and Maurice Vander, and played in the orchestras of Martial Solal, Michel Portal and others. In 1981 he formed his own group, the "Steckar Tubapack", and his first recording in 1982 won the Prix Boris Vian, awarded by the Académie de Jazz. Marc Steckar has recorded over twenty discs using the tuba and in 1990 he started to mix the tuba with other ensembles, big bands, brass bands, wind bands, and choirs. In 1994 he composed several concertos for tuba, euphoniums and trombones and in 1999 received the Sacem Prix Printemps. He has gone on to compose several children’s tales and concertos for clarinet quartet, trumpets and bass trombone, all with wind ensemble. Marc Steckar is the father of Franck Steckar