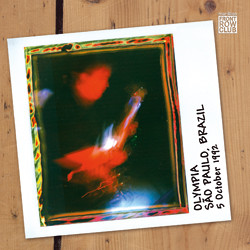 ''Part of a small set of South American shows to promote both 'Holidays in Eden' and the 'Singles Collection' album, along with celebrating the band's 10th anniversary. As you can see from the set list, this is certainly a collection of singles and live favourites, and the band seem to be enjoying the gig immensely (leading to a 'Brazil Blues' jam!).'' Track times/listing from CD playback.