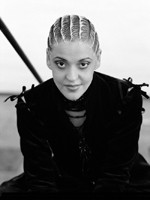 Mariza ([mɐˈɾizɐ] ), , born Marisa dos Reis Nunes (16 December 1973, Lourenço Marques, Portuguese Mozambique), is a popular fado singer.Mariza was born to a Portuguese father and a mother of partial African heritage. At age three, her family moved to Metropolitan Portugal, and she was raised in Lisbon's historic quarters of Mouraria and Alfama. While very young she began singing in a wide variety of musical styles, including gospel, soul and jazz. Her father strongly encouraged her to adopt fado; he felt that participating in the traditional music would grant her greater acceptance in the Portuguese community. Mariza has sold over 1,000,000 records worldwide.

Quem Me Dera on Mariza by Mariza

Recusa on Transparente by Mariza