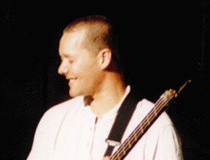 Described by NME as a "spiritual disco-technician," Max Brennan has recorded some of the most consistently imaginative music of the last decade. Describing himself as "on a spiritual tip, into cosmic things," Max was initiated into Transcendental Meditation (as taught to the Beatles by Maharishi Mahesh Yogi) some years ago and describes his current life as "attempting to stay balanced in the Western world." Meditation, he says, gives him the "nice inner states of bliss I was always looking for with class A drugs. I'm getting more detached from all the bad things in the world and I definitely see that as a good thing." Making his home on the Isle of Wight, where he has lived all his life, the distinct lack of anything else worth doing leads Max into the far reaches of philosophical and extraterrestrial thought. "We sit around for hours chewing the fat about conspiracy theories - and you end up with a head full of amazingness. Me, I'm into the idea that there are things up there helping us evolve down here. Call them angels, aliens, whatever you like." These interests have always been reflected in his music, from his own Alien to Whom?, the "joyous stomping. . disco-techno, alien encounter..feel-good" of We Are Part Of Us And So Are You, and O.H Krill's The Krill Papers, to Fretless AZM's Astral Cinema, and of course his Maxwell House projects for Peacefrog. Max records with a makeshift assemblage of ancient synthesizers, live instruments and modern samplers to achieve a special blend of live organic sounds with a contemporary twist. Something of an electric bass virtuoso, Max is also a dab hand at keyboards, tabla, double bass and any number of instruments that cross his path, mixing influences from funk, disco, jazz, Indian classical and movie soundtracks. Some of his best music consists of collaborations with local and London-based musicians, including Tom Vernon, Paul Butler, Rupert Brown and James Nye. But Max is also a seasoned solo performer, combining driving bass playing with sojourns at the mixing desk and keyboards, and usually stealing the show at any live gig in which he participates. He has performed at many festivals throughout Europe. Max is also much sought after as a DJ and remixer.

1300 Milliseconds Of Brass on Alien To Whom? by Max Brennan

Banging The Bass on Alien To Whom? by Max Brennan

Facial Expressions on The Discerning Dancefloor by Various Artists

We Have Been Tweeked on Alien To Whom? by Max Brennan

Venusian Shuffle on Alien To Whom? by Max Brennan

Narita Express on Alien To Whom? by Max Brennan