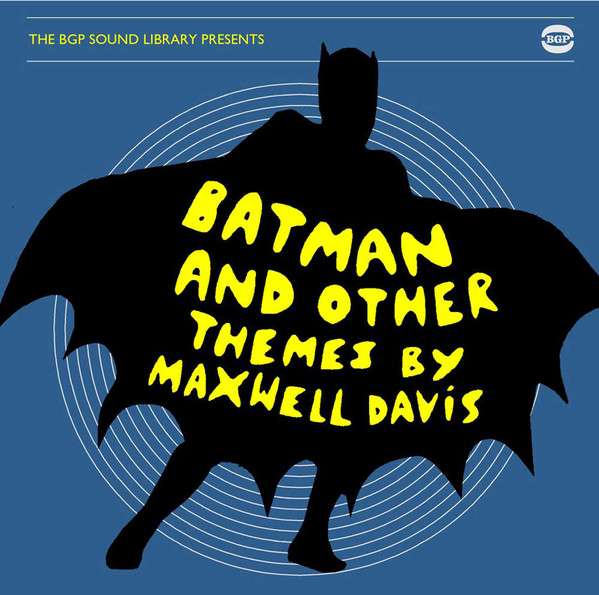 Tracks 1 - 10 were released on US Crown LP CST 509 and UK Ember LP FA 200 Inner sleeve note: 'Welcome to the BGP Sound Library. From time to time we find a bunch of groovy music in the office that doesn’t quite fit in with all the usual ideas of a release schedule. It isn’t funk, soul or jazz, but it’s certainly valid. It may have been recorded for an easy listening album for a label’s budget arm, it may have been aimed at getting placed on TV, it may be just a passing fancy of a chief arranger or A&R chief – who was allowed to indulge himself as a pay-off for discovering the latest money earner for the label. Much of this sounds like a lost music library of the sort that publishers put together so that TV producers and advertisers could have a cheap source of music to utilise. Our first release in what will be an irregular series, “BATMAN AND OTHER THEMES” recorded by legendary Los Angeles producer Maxwell Davis in 1966, may well have been recorded for just that purpose. 1966 saw an upsurge of interest in Batman as the ABC TV network started broadcasting, in primetime, a brand new series of the adventures of Batman and Robin. Within months it was an international success story, and its Neil Hefti theme tune and pop art-influenced look became virtually unavoidable. The Who covered the theme song on their “Ready Steady Who” EP while in Los Angeles Maxwell Davis recorded it for the Crown label. Alongside a cover of the Batman Theme, the LP contained a bunch of pounding go-go instrumentals – all punchy brass and exciting organs – given titles that sounded as if they could have underscored specific scenes in the TV series. The LP was also released in the UK on Ember Records in the middle of 1966. The album cover features Maxwell Davis’s name so small that it is very easy to miss it. This was quite clearly a TV cash-in LP. For the CD release, we found in the Modern vaults three bonus tracks to add to the project, all very much in the spirit of the Bat-songs. Green Hornet Theme and Tijuana Harlem are from an LP – arranged and led by Maxwell – by the Mexicali Brass, who were put together by Crown to cash-in on the success of Herb Alpert & his Tijuana Brass. These two tracks also appeared as a 45 on Modern’s Kent label credited to Maxwell Davis & the Harlem Brass, and they fit in with the TV sounds here. The Green Hornet was a crime fighter who had first appeared on radio shows in the 1930s. In 1966, a TV version of the Green Hornet became one of the super-hero shows that followed in the wake of the success of Batman, today most notable for the fact the Bruce Lee played the Hornet’s side kick Kato. Our final track is a cover of the famous theme tune to The Good, The Bad And The Ugly, written by Ennio Morricone. So here we have it, the BGP Sound Library’s first production. Punchy, action-filled grooves. DEAN RUDLAND'