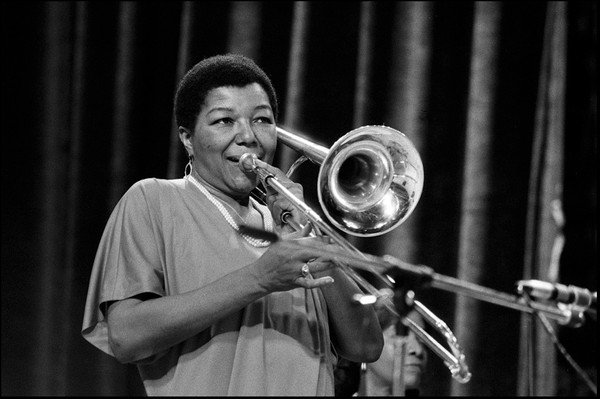 American trombonist & arranger. Melba's professional career started on the legendary Central Avenue, where she became the first woman wind-instrumentalist in the Lincoln Theater pit orchestra conducted by Bardu Ali. From the 1940s through the 1960s, she was the first woman trombonist to work in the leading big bands of Dizzy Gillespie, Count Basie, Duke Ellington, Quincy Jones, Gerald Wilson, and Clark Terry. Melba went into performance retirement and moved to Jamaica from 1973 to 1979, where she first taught at the University of the West Indies and then became director of Popular Music Studies at the Jamaica Institute of Music in Kingston. She was forced to give up playing in 1985 after a stroke left her partially paralyzed, but she continued to arrange music with Weston, contributing her imaginative, often strikingly dramatic arrangements to a succession of his albums in the 90s. She was afflicted by a further series of strokes, which eventually proved fatal. Born: January 13, 1926, Kansas City, Missouri. Died: April 23, 1999, Los Angeles, California.