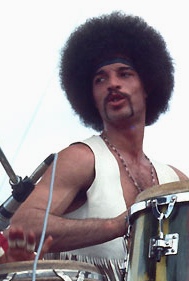 cng, perc, *1947 US, San Francisco
Musician of Rock and Latin

Michael Carabello (born November 18, 1947) was one of three percussionists in the latin rock group Santana, along with Michael Shrieve and Jose Areas between 1968 and 1971, during the recording of their first three albums, Santana, Abraxas and Santana III.Rock and Roll Hall of Famer Michael Carabello, the original conga drummer in Carlos Santana's band, married Linda Houston in the Presidio Chapel on Saturday night September 18, 2010. Carabello and Houston were classmates at Mission High and re-met last year at a 40th high school reunion. . Michael now resides in Connecticut.