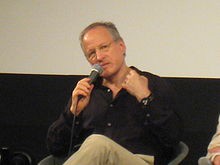 *1943 US, Chicago
Producer of Blues
A.k.a. Michael Kenneth Mann

Michael Kenneth Mann (born February 5, 1943) is an American film director, screenwriter, and producer.For his work, he has received nominations from international organizations and juries, including those at the British Academy of Film and Television Arts, Cannes and the Academy of Motion Picture Arts and Sciences. His major films include the period epic The Last of the Mohicans (1992), the drama The Insider (1999), the biopic Ali (2001), and the crime films Heat (1995) and Collateral (2004).

The Melchizedek Song - Ll on Souls Restless: Pursuing The Be Ye Perfect Path by Mark Austin

Call Me Mr. Mann on I Still Got My Guitar by Michael Mann