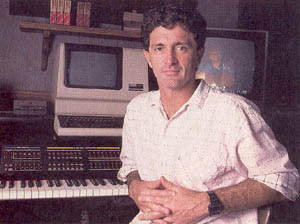 Pianist, Keyboardist, Producer, Arranger A professional classical pianist since early childhood, Michel started his career accompaniying his violinist father, Jan Rubini. He spent much of the 1960s and 70's either on tour or in the studio and worked with diverse list of artists ranging from Ray Charles to Frank Zappa and Frank Sinatra, Sonny & Cher to Barbra Streisand. In addition he was also working as a producer and arranger for Motown Records. In the 80's his success led him to Hollywood to make music for movies. Some of his higlighting scores were to films "The Hunger", "The New Kids", "Band Of The Hand", "Manhunter" and "Nemesis".

Graham's Theme - From "Manhunter" Soundtrack on Manhunter: Music From The Motion Picture Soundtrack by Various Artists

The Hitchiker Theme on The Hitchhiker TV Series, Vol. I by Michel Rubini

On the Hunt on Nemesis by Michel Rubini

The Last Dream, M12 on The Hitchhiker TV Series, Vol. I by Michel Rubini