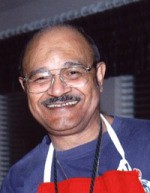 Mickey Tucker (b. April 28, 1941, Durham, North Carolina) is an American jazz pianist and organist currently living in Melbourne, Australia.Tucker began on piano at age six, and played in church when young. He did studio work in the 1960s with R&B musicians such as Little Anthony & the Imperials and Damita Jo; he accompanied comedian Timmy Rogers. He switched to jazz music late in the 1960s, and in the late '60s and '70s played with Bill Hardman, Junior Cook, James Moody, Frank Foster, Roland Kirk, Eric Kloss, Thad Jones and Mel Lewis, Roy Brooks, Eddie Jefferson, Billy Harper, Philly Joe Jones, George Benson, Willis Jackson and Final Edition. He played with and directed Art Blakey's Jazz Messengers in Europe in the mid-1970s.

Blue Bossa (Live) on Live at the Casa Caribe Vol. 1 by George Benson

Nica's dream on Blues In Five Dimentions by Mickey Tucker

Tres cicli, 2. Movement on Getting There by Mickey Tucker

Coltrane suite: Resolution on Getting There by Mickey Tucker

Bushman on Blues In Five Dimentions by Mickey Tucker

Cloud Seven on Hang in There by Mickey Tucker

Happy on Hang in There by Mickey Tucker

Lil Darlin' (Live) on Live at the Casa Caribe Vol. 2 by George Benson

Synapse II on Blues In Five Dimentions by Mickey Tucker