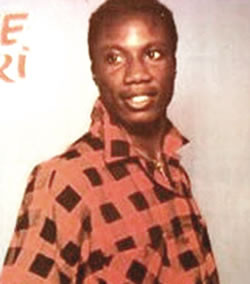 Mike Okri stormed the Nigerian music scene in 1988 with his chart-busting debut LP, Concert Fever. The singer who belonged to the Nigerian pop generation of Dizzy K Falola, Felyx and Mozyx, Alex O, Alex Zitto and Chris Mba, almost immediately changed the general tone of Nigerian pop music and was hailed as a fresh sound. The album produced by veteran Laolu Akins, spawned the evergreen hit singles Omoge – an ode to the ‘dangerous’ new breed of Lagos women – and Time Na Money, which preached the necessity of time management and planning. Other songs of the album include Orin Tun Tun, No more brother, Let your love show and Ayeme. Following the success of the album, Okri soon emerged the hottest new act of the 90s whose appeal cut across all tribes and age.

Me Sisi on Rhumba Dance by Mike Okri

Wisdom on Cracks by Mike Okri

You're Di One on Rhumba Dance by Mike Okri