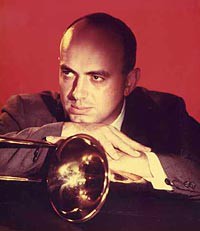 American Jazz trombonist, (May 25, 1926 in Valparaiso, Indiana – January 22, 2004 in Glendale, California). Milt Bernhart was a West Coast jazz trombonist who worked with Stan Kenton, Frank Sinatra, and others. He supplied the exciting solo heard in the middle of Sinatra's popular 1956 recording of I've Got You Under My Skin, conducted by Nelson Riddle. Bernhart (occasionally spelled Bernhardt) began on tuba, but switched to trombone in high school. At 16 he worked in Boyd Raeburn's band and later had some "gigs" with Teddy Powell. After time in the United States Army he worked, off and on, with Stan Kenton for the next ten years. He is perhaps most associated with Kenton, but in 1955 he had his first album as a leader. In 1986 he was elected President of the Big Band Academy of America. Although known as "mild-mannered" or humorous, his brief period with Benny Goodman was one area that brought out his ire. He indicates working with Goodman was "the bottom", except for basic training in the Army, of his first 23 years of life. He called Goodman a "bore" and claimed he did nothing about the treatment Wardell Gray faced at a segregated club in Las Vegas. He even alleges that he quit because Goodman publicly humiliated Gray in front of an audience.