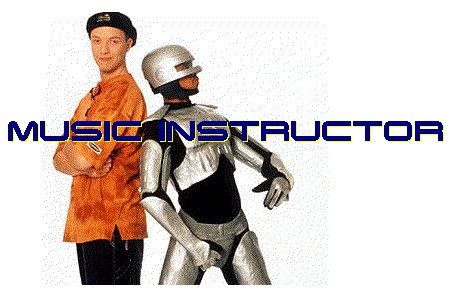 Music Instructor is a German dance music project. The producers and songwriters of Music Instructor are Mike Michaels, Mark "MM" Dollar, and Mark Tabak, also known as Triple-M Crew. Triple-M has also produced other artists and bands such as Highland, The Boyz, Overground, Before Four, US5 and Ayman. Music Instructor often worked with many other artists, especially a group Lunatics and a breakdance crew Flying Steps, and was most active in the late 1990s and early 2000s. They frequently experimented with different styles and were one of the most important projects in the modern electro scene. At first, the group made dance/techno music similar to happy hardcore with the musician and singer Holly Trance. Its first single was a cover of Hymn, originally performed by Ultravox. It was released in 1995, and was followed by the album The World of Music Instructor in 1996 with three more singles - Hands In The Air, Dream A Little Dream and Dance. They also released the single Friends Will Be Friends, which didn't appear on the album and was a cover of Queen's song of the same title. At the time of the regrowing popularity of electro music in 1998, Music Instructor became an electro project, and released the album Electric City of Music Instructor with the hit single Super Sonic along with the other singles Rock Your Body, Get Freaky and Electric City. The first three singles featured Flying Steps, and Get Freaky also featured Lunatics. For both Get Freaky and Electric City a special single edit was made, different from the original song, and the character Abe from Oddworld video games appeared in videos for both singles. Super Sonic's single version was also slightly different from the album version. The first edition of this album was called Electro City and contained the original Get Freaky and Electric City instead of the single versions. The album also featured the Music Instructor Megamix and covers of Newcleus' Jam On It, Freestyle's Don't Stop The Rock, Jonzun Crew's Pack Jam (Look Out For The OVC) and Shannon's Let The Music Play. After the second album, the group remixed DJ Session One's Dreams In My Fantasy and released the singles DJ's Rock Da House (1999), Super Fly (Upper MC) featuring the rapper Dean from Lunatics and Highland (2000), and Play My Music featuring Veronique (2001).

Get Freaky - Single Edit on Electric City by Music Instructor

Let the Music Play on Electric City by Music Instructor