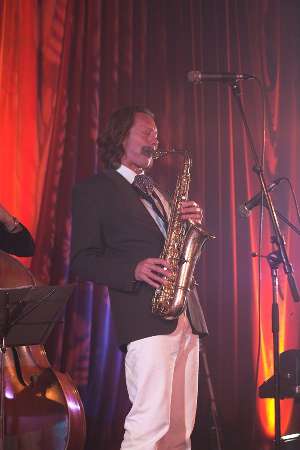 Born January 18, 1972 in Auckland, New Zealand to a well-known jazz family (his father is Kevin Haines and his brother is Joel Haines), he gathered quite a reputation in his late teens and early twenties, playing with Jazz Committee and Freebass (8), before forming his own band, who eventually became known as The Enforcers. Signing to Huh Records, his début solo album, Shift Left, is the biggest selling NZ recorded jazz album of all time and was released globally on Verve Records. In 1995 Haines went to NYC and then to London, where he worked as a live musician and session player. He also began DJing. He recorded Drum'n'Bass for Metalheadz before signing to Chillifunk Records where he made two albums with Phil Asher before returning to NZ in the early 2000s. He continues to record and perform extensively in NZ, Asia and Europe.

Fm on Squire For Hire by Nathan Haines

My Brother - Frank Booker & Nathan Haines Remix on My Brother by L.A.B.

Folk Jazz on Squire For Hire by Nathan Haines

Let It Go on Squire For Hire by Nathan Haines