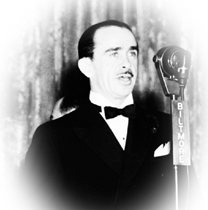 1901-1976 US, Scranton, Pennsylvania
Composer of Children's Music and Soundtrack

Little Wooden Head - From "Pinocchio"/Score on Pinocchio by Various Artists

This Is the Naked City (feat. James Darren, Jud Conlon Singers) on The Naked City by Ned Washington & George Duning

When You Wish Upon a Star on Therapy With the Classics Vol. 4 by Music Therapy