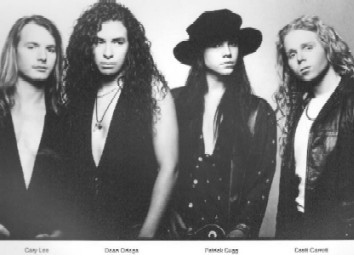 Dean Ortega - Lead Vocals, Percussion Patrick Sugg - Guitars, Backing Vocals Gary Lee - Bass, Backing Vocals Scott Garrett - Drums, percussion Neverland hit the music scene at the beginning of the 90s as a four piece Californian rock band. They released their self-titled debut on Interscope in 1991 and also had one of their songs, "Drinking Again", appear on the soundtrack to "Bill and Ted's Bogus Journey" (although it was actually the song "For the Love" that appeared in the film). The band toured to support the album, but they split up afterwards. Dean left the band and went on to become the lead vocalist for The band Tribe of Gypsies ( RCA VICTOR) Records, he also formed Revolution Child (High Impact) Records, and recently in his newest project Resurrect The Machine (Monotaro Records). In 1996, Neverland reformed with a new vocalist "Bump", to release "Surreal World" in Europe (it was never released in the U.S.). Scott Garrett (2) only recorded on half the tracks before he went off to play with "The Cult". Kevin Valentine (ex-Shadow King) fills in for the rest of the tracks. Having released "Surreal World", Neverland disbanded. Patrick Sugg and Scott Garrett (2) had already formed a new band by then with Ian Astbury, the former singer of The Cult, called the Holy Barbarians. They released an album called "Cream" in 1996 on Warner Bros. in the U.K. and Beggars Banquet in Europe. They toured for about 10 months in '96 in the U.S. and England and all over Europe.