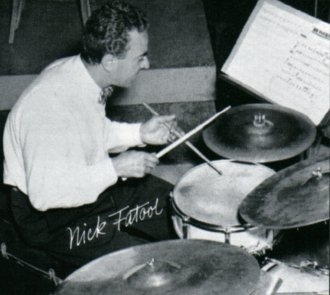 Nick Fatool (b. Jan. 2, 1915, Millbury, Massachusetts - d. Sep. 26, 2000, Los Angeles, California) was an American jazz drummer.Fatool first played professionally in Providence, Rhode Island, which he followed with time in Joe Haymes's band in 1937 and Don Beston's in Dallas soon after. In 1939 he played with Bobby Hackett briefly, and then became a member of the Benny Goodman Orchestra. He became one of the most visible drummers of the 1940s, playing with Artie Shaw (1940–41), Alvino Rey (1942-43), Claude Thornhill, Les Brown, and Jan Savitt. In 1943 he moved to Los Angeles and took work as a session musician, recording profusely. Credits include Harry James, Erroll Garner (1946), Louis Armstrong (1949, 1951), Jess Stacy, Tommy Dorsey, Matty Matlock, and Glen Gray. He began an association

What Will I Do Without You (feat. Eddie Miller, Moe Schneider, Stan Wrightsman, George Van Eps, Nick Fatool) on Unsung Musician - Arranger by Matty Matlock