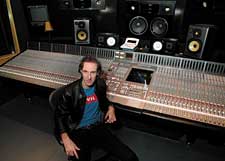 Nicolas Launay (born 5 March 1960) is an English record producer, composer and recording engineer. He is one of the most sought after record producers in the world due to his success with recent albums by the Yeah Yeah Yeahs, Arcade Fire, and Nick Cave and the Bad Seeds. He is among the most successful producers of the post-punk era, helming records from pivotal acts including: Public Image Ltd, Gang of Four, Killing Joke, The Birthday Party, and The Slits.

Hindsight on Rock and Roll by The Mark Of Cain