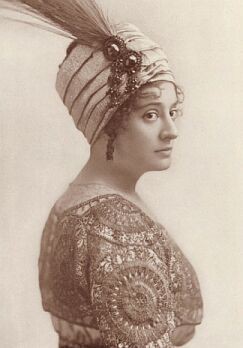 Popular American singer, comedienne and actress of the early 20th century. (October 8, 1880 – March 19, 1928) Born Eleanor "Dora" Goldberg, with Dora being a pet or nickname, to a Jewish family in Joliet, Illinois, Bayes was performing professionally in vaudeville in Chicago by age 18. She toured from San Francisco, California to New York City and became a star both on the vaudeville circuit and the Broadway stage. In 1908, she married singer-songwriter Jack Norworth. The two toured together and were credited for collaborating on a number of compositions, including the immensely popular "Shine On, Harvest Moon," which the pair debuted in Florenz Ziegfeld's Follies of 1908. Bayes made many phonograph records (some with Norworth) for the Victor and Columbia labels. From 1924 through 1928, her accompanist was pianist Louis Alter, who later composed the popular songs "Manhattan Serenade," "Nina Never Knew" and "Do You Know What It Means to Miss New Orleans?". Bayes established her own theater, The Nora Bayes Theater, on West 44th Street in New York. She was portrayed by Ann Sheridan in the 1944 musical biopic Shine On, Harvest Moon, which focused on her relationship with Norworth, played by Dennis Morgan (4), and ignored her other husbands.

Over There on Songs of WW1 by Various Artists