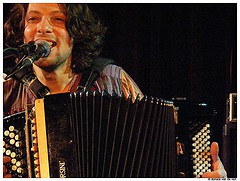 Oleg Fateev is a bayan player. (Bayan=Russian button accordion). Oleg was born on 5th July 1967, Moldova (Former Sovjet Union). After his studies in the music college in Tiraspol (Moldova), he continued his musical education in the Russian Gnesin Academy of Music in Moscow. In 1993 he graduated as a bayan player and as a conductor. Since 1996 he lives in the Netherlands, where he has played a lot of solo concerts, participated in many theatre productions, played on festivals, and participated in experimental music projects. Oleg Fateev plays Russian, Moldavian, and classical, as well as improvised music. He also writes his own compositions and arrangements, in which you can hear his Moldavian roots. In 1998 he started his own band: the Oleg Fateev Trio.