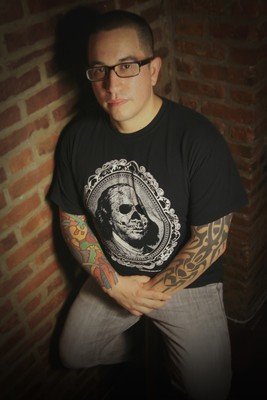 Onionz (born 1970) is an American music producer, DJ, and musician. The native New Yorker is known for his many contributions to Electronic Music, and more specifically, his unique signature DJing style of blending House music and Techno sounds together. In 2002, he was nominated for Billboard Magazine’s Beat Box DanceStar USA Awards in the Best Breakthrough DJ category. Onionz' earliest musical influence was his father, Victor Venegas, who played upright bass alongside important Latin and Jazz musicians such as Mongo Santamaría, Celia Cruz, Nina Simone, and Harlem River Drive Band. By the age of ten, Onionz was an accomplished percussionist on his own, making regular stage appearances together with his father and other notable musicians including Candido, David Amram, Steve Berrios, and Paquito D'Rivera. As a youth, Onionz gained further musical inspiration from David Mancuso (The Loft NYC creator), DJ/producer duo The Latin Rascals, and Red Alert. By mid-1982, Onionz began mixing together early styles of Hip hop, Breakbeat, and Disco records while DJing local NYC venues. Over the last 35 years Onionz has toured and headlined premier dance music festivals and events throughout 45 states within the US and 37 countries abroad. Within the past 25 years, Onionz has contributed both original productions and remixes to numerous dance music labels including Intec Digital, Warner Music/Rhino Records, Om Records, Defected Records, Champion Records, and Ibadan Records. Additionally, he produced remixes for many influential dance music artists including Carl Cox, Robin S, Roy Ayers, Robert Owens, and Sandy B. In 1994, he founded the dance music record label Electrik Soul. Electrik Soul has put out music by Dubtribe, Dj Yousef, Joeski, Tony Senghore, Hipp-e, Fred Everything, ETI, Leo Young Eli Escobar, Shan Nicholson, Wally Callerio, Dj Who, Troy Dillard, Vitamin D, Halo, and Master D. Currently, Onionz remains an active within the Electronic Music scene as he continues to tour and deliver his signature style of DJing to audiences throughout the United States and abroad. He has an established production catalog of 200 + original music tracks and remixes which continues to grow. During 2016 and 2017 Onionz wrote his first film score as Musical Director for the short Xing Film. Onionz lead and introduced the Xing Film team to the current world of Electronic Music by including incredible talent into his score with music by licenses by Slam, Frankie Bones, Carl Cox and Funk D Void. The film that Onionz helped design and power won its way to 18 film festivals and two awards including a screening at Festival de Cannes in France.

Cannabis Club (Remix) on Memoirs of a Curb Server by J. Stalin

The Player - Onionz Remix on The Player [Remixes] by Carl Cox