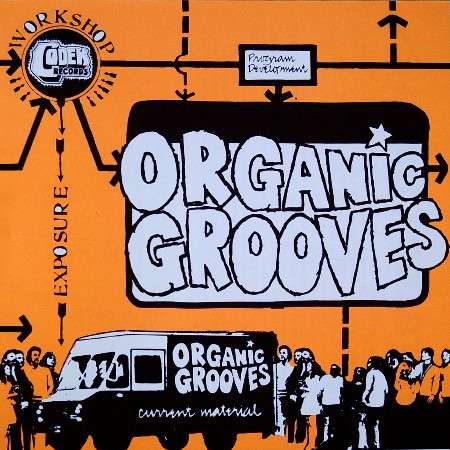 [from insert] Organic Grooves is a weekly party which provides the hypnotic sounds of the most underground music in the city [New York]. The music featured at the Organic Grooves parties, known as "cosmic" is a little known genre which, similar to today's hip-hop and electronic dance music, is focused on the DJ and his manipulation of vinyl. However, the "cosmic" records played by the DJs at Organic Grooves do not fall into any narrowly defined categories with an essential set of idioms or motifs. The genius of cosmic is that it can be absolutely any type of music - what defines it as such is the DJ - as long as the record has the right vibe, the proper dancey yet downtempo groove; anything, from New Wave to Reggae to Disco, can be appropriated in order to create the explosively original sound which characterizes the Organic Grooves events. The resulting hyper-eclecticism demands that the listeners come open-minded and prepared to hear the unexpected. The chaos is heightened with the addition of live musicians who play on top of the DJ, pulling the music further away from any ordinary clichés. At Organic Grooves, the usual formula of the familiar and predictable are replaced by the obscure and unlikely - but carefully and strategically situated (and often purposefully played at the incorrect speed; 45's as 33, and vice versa) in order to create a decentering experience beyond any notion of rigid genre category. The end result is a powerful and atmospheric, dubbed-out, heady mix of breaking and repetitive rhythms, which are at once evocative of tribal, ethnic, and folk music as well as a more contemporary, gritty, urban-funk.