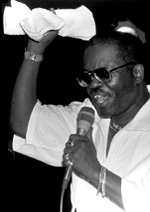 Otis Blackwell (February 16, 1931 – May 6, 2002) was an African-American songwriter, singer, and pianist, whose work significantly influenced rock and roll. His compositions include Little Willie John's "Fever", Jerry Lee Lewis' "Great Balls of Fire" and "Breathless", Elvis Presley's "Don't Be Cruel", "All Shook Up" and "Return to Sender" (with Winfield Scott), and Jimmy Jones' "Handy Man". He should not be confused with another songwriter and producer Robert "Bumps" Blackwell.

It's All Over Me on The Northern Soul Story Vol.4: Wigan Casino by Various Artists

Let The Daddy Hold You on Jukebox Jam by Various Artists

Don't Be Cruel on These Are My Songs! by Otis Blackwell

Return to Sender on These Are My Songs! by Otis Blackwell

Great Balls of Fire on These Are My Songs! by Otis Blackwell

All Shook Up on These Are My Songs! by Otis Blackwell

Great Balls Of Fire on All Shook Up by Otis Blackwell