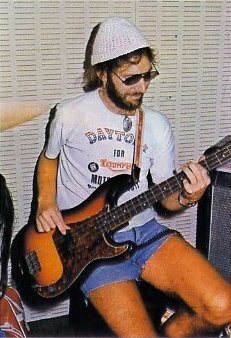 Born c. 1947 in Canada, Paul Rudolph worked as a session musician in the UK, as a member of The Pink Fairies he regularly jammed live with Hawkwind as Pinkwind, during this time he also worked with Brian Eno, Sparks and future Hawkwind bandmate Robert Calvert. In 1975 he joined Hawkwind full-time, contributing to one album ("Astounding Sounds, Amazing Music") and the single "Back On The Streets" before he and drummer Alan Powell were ejected for attempting to insert jazz and funk elements into the band's sound. To this day he resides in Vancouver, Canada and is now a professional Cyclist.