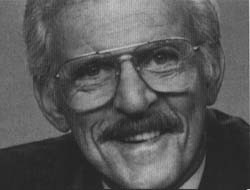 Paul Winchell (December 21, 1922 – June 24, 2005) was an American ventriloquist, comedian, actor, voice actor, humanitarian and inventor whose career flourished in the 1950s and 1960s. From 1950–1954, he hosted The Paul Winchell Show, which also used two other titles during its prime time run on NBC, The Speidel Show, and What's My Name?. From 1965–1968, Winchell hosted the children's television series, Winchell-Mahoney Time.