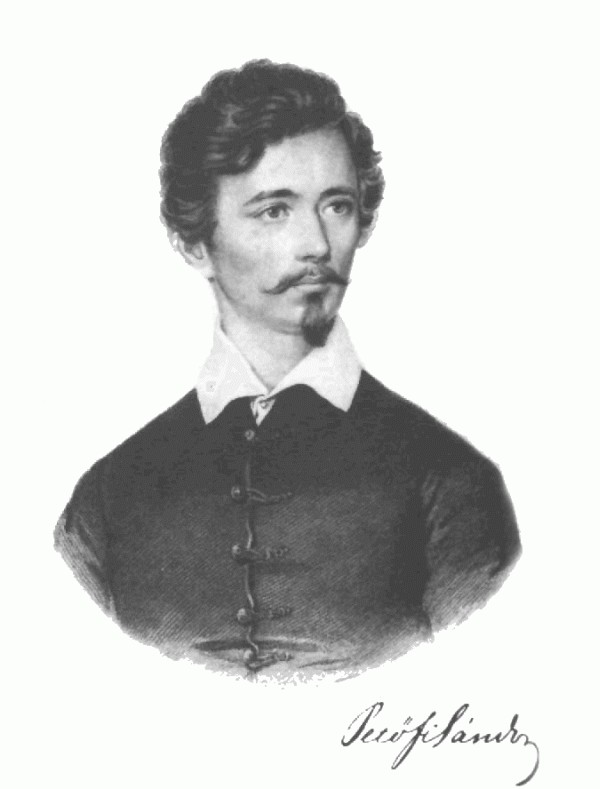 Hungarian poet, revolutionary and national hero. He is the best known Hungarian poet of the world. Born: 31 December 1822 (or 1 January 1823), Kiskőrös, Hungary. Died: 31 July 1849 ?, Segesvár, Hungary (now Romania). Petőfi started his career as a poet with "popular situation songs", a genre to which his first published poem, A borozó ("The Wine Drinker", 1842), belongs. It is the song of a drinker praising the healing power of wine to drive away all troubles. This kind of pseudo-folk song was not unusual in Hungarian poetry of the 1840s, but Petőfi soon developed an original and fresh voice which made him stand out. He wrote many folk song-like poems on the subjects of wine, love, romantic robbers etc. Many of these early poems have become classics, for example the love poem A virágnak megtiltani nem lehet ("You Cannot Forbid the Flower", 1843), or Befordultam a konyhára ("I Turned into the Kitchen", 1843) which uses the ancient metaphor of love and fire in a playful and somewhat provocative way. The influence of folk poetry and 19th-century populism is very significant in Petőfi's work, but other influences are also present: Petőfi drew on sources such as topoi of contemporary almanac-poetry in an inventive way, and was familiar with the works of major literary figures of his day, including Percy Bysshe Shelley, Pierre-Jean de Béranger and Heinrich Heine. Petőfi's early poetry was often interpreted as some kind of role-playing, due to the broad range of situations and voices he created and used. Recent interpretations however call attention to the fact that in some sense all lyrical poetry can be understood as role-playing, which makes the category of "role-poems" (coined especially for Petőfi) superfluous. While using a variety of voices, Petőfi created a well-formed persona for himself: a jaunty, stubborn loner who loves wine, hates all kinds of limits and boundaries and is passionate in all he feels. In poems such as Jövendölés ("Prophecy", 1843) he imagines himself as someone who will die young after doing great things. This motif recurs in the revolutionary poetry of his later years. The influence of contemporary almanac-poetry can be best seen in the poem cycle Cipruslombok Etelke sírjára ("Branches of Cypress for Etelke's Tomb", 1845). These sentimental poems, which are about death, grief, love, memory and loneliness were written after a love interest of Petőfi's, Csapó Etelka, died. In the years 1844–45 Petőfi's poetry became more and more subtle and mature. New subjects appeared, such as landscape. His most influential landscape poem is Az Alföld ("The Plains"), in which he says that his homeland, the Hungarian plains are more beautiful and much dearer than the Carpathian mountains; it was to become the foundation of a long-lived fashion: that of the plains as the typical Hungarian landscape. Petőfi's poetic skills solidified and broadened. He became a master of using different kinds of voices, for example his poem A régi, jó Gvadányi ("The Good Old Gvadányi") imitates the style of Gvadányi József, a Hungarian poet who lived at the end of the 18th century. It is interesting to note that several of Petőfi's poems were set to music by the young Friedrich Nietzsche, who composed as a hobby while studying classics at Pforta before beginning his career in philosophy. Petőfi maintained a lifelong friendship with Arany János, another significant poet of the time. Arany was the godfather of Petőfi's son Zoltán.