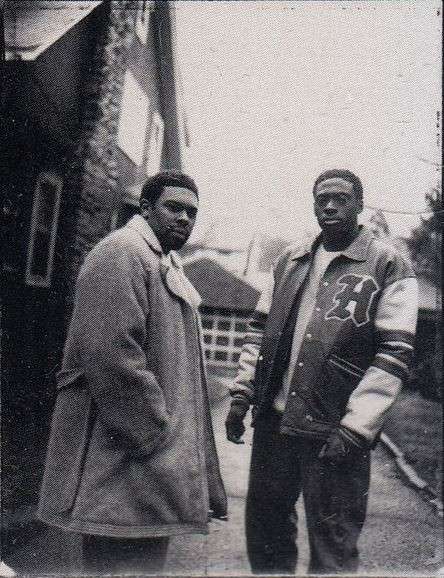 Pete Rock & C.L. Smooth were a hip-hop duo from Mount Vernon, New York. They made their debut with their 1991 EP, All Souled Out and followed with 1992's Mecca and the Soul Brother LP. As a producer, DJ Pete Rock (Peter Phillips) tended to prefer obscure soul and jazz sides for sample sources, frequently making use of horn-driven hooks. Lead vocalist CL Smooth (Corey Penn) tended to be philosophical in his raps, and he mostly avoided profanity. Their signature hit was “They Reminisce Over You (T.R.O.Y.)”, a dirge for fallen friends--namely Troy "Trouble T-Roy" Dixon, a member of Heavy D & The Boyz, who died in 1990. 1994's The Main Ingredient was the follow up, and they appeared on a string of guest appearances for remixes, soundtracks, and other works. Public Enemy, EPMD, Heavy D and Johnny Gill were among the artists they collaborated with, and they can also claim credit for producing (and performing on) Run-DMC’s 1993 comeback single 'Down with the King'. Despite all this, the duo failed to go gold on any of their own releases. Separating in 1995 (shortly after a Sprite TV commercial), they eventually reunited on a handful of cuts from Pete Rock’s solo recordings: Soul Survivor (1998), PeteStrumentals (2001) and Soul Survivor II (2004). They also went on a brief reunion tour as a warm up for their then-anticipated new album, which ended with a show at London's famous Jazz Cafe. Despite these intermittent collaborations, the pair has exchanged dismissive comments toward each other in separate interviews, disavowing plans for a full-fledged reunion. Their best-of compilation, Good Life, was released on Elektra in 2003. A deluxe CD box-set of Mecca and the Soul Brother was released in October 2010 by Traffic, a division of Elektra. The package includes a remastered CD of the original album, a second disc of remixes, instrumentals and acapellas, a fold-out poster and a detailed booklet with interviews and insights from Rock and Smooth. (courtesy wikipedia)

They Reminisce Over You (T.R.O.Y.) on Mecca And The Soul Brother by Pete Rock & C.L. Smooth

Straighten It Out on Mecca And The Soul Brother by Pete Rock & C.L. Smooth

The Creator on All Souled Out by Pete Rock & C.L. Smooth

Take You There on The Main Ingredient by Pete Rock & C.L. Smooth

All the Places on The Main Ingredient by Pete Rock & C.L. Smooth

Lot's of Lovin on Mecca And The Soul Brother by Pete Rock & C.L. Smooth

For Pete's Sake on Mecca And The Soul Brother by Pete Rock & C.L. Smooth

I Got a Love on The Main Ingredient by Pete Rock & C.L. Smooth