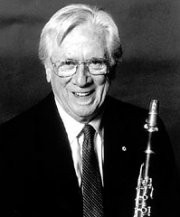 Phillip Rista "Phil" Nimmons, OC OOnt (born June 3, 1923) is a Canadian jazz clarinetist, composer, bandleader, and academic.Born in Kamloops, British Columbia, the son of George Rista and Hilda Louise (McCrum), he attended Lord Byng Secondary School, graduating in 1940. He then received a B.A. from the University of British Columbia in 1944. During his time in Vancouver, he played in the Ray Norris Quintet. From 1945 to 1947, he was a scholar at the Juilliard School of Music. From 1948 to 1950, he attended the Royal Conservatory of Music.

Do I Know You on Atlantic Suite, Suite P.E.I., Tributes by Phil Nimmons