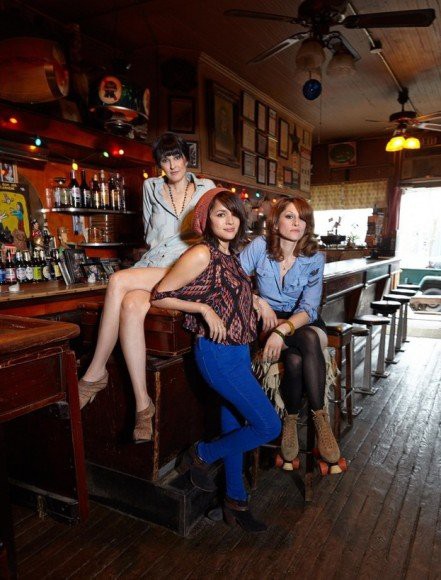 Puss n Boots is an American alternative country band from Brooklyn, New York, formed in 2008 that consists of members Norah Jones, Sasha Dobson and Catherine Popper. Their debut full-length album, No Fools, No Fun, was released on July 15, 2014, through Blue Note Records. The group formed in 2008 when Jones began playing Brooklyn venues to practice guitar, with the help of Dobson. They were then joined by Popper, and the three began working together to expand creatively. Since the group came together each member has made attempts at trying new instruments they weren't previously accustomed to. In a July 2014 interview with SiriusXM, they described the formation of the band: "Sasha booked a gig at a pool hall for us to learn guitar on ... So, that’s how we started playing guitar, because Sasha and I, we were already singers," said Norah. "We learned enough chords on guitar to get Catherine here to play with us ... We played a lot of gigs when we were all in town just kinda to get together and have fun. And then finally we sounded like a band enough to where we thought we’d make a record."

Jesus, Etc. on No Fools, No Fun by Puss N Boots

The Grass Is Blue on Sister by Puss N Boots

Leaving London on No Fools, No Fun by Puss N Boots

It's Not Christmas 'Till You Come Home on Dear Santa... by Puss N Boots

Don't Know What It Means on No Fools, No Fun by Puss N Boots