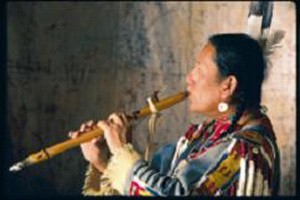 R. Carlos Nakai is a Grammy Award nominated Native American flautist of Navajo/Ute heritage, born April 16, 1946 in Flagstaff, Arizona, USA. Nakai is classically trained in both trumpet and music theory. He also holds a Master’s Degree in American Indian Studies from the University of Arizona. Nakai received a traditional cedar wood flute as a gift and was challenged to see what he could do with it. He released his first solo album in 1983 and has since recorded roughly 50 albums and received nine Grammy Award nominations, the most recent for his 2010 release "Dancing Into Silence". Two of his albums, "Canyon Trilogy" and "Earth Spirit" are certified gold records in the United States.

Song For the Morning Star on Canyon Trilogy by R. Carlos Nakai

Song of Darkness on Talisman by R. Carlos Nakai

Song for the Morning Star on Canyon Trilogy by R. Carlos Nakai