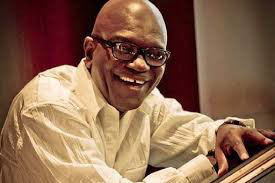 Died December, 2015 "A respected TT pianist, composer and recording artist who’s created beautiful calypso-jazz music, Robertson has recorded four albums: Just Teasin’ (1989), Branches (1994—a tribute to Lord Kitchener), Universal Rhythm (2000) and Majesty (2011). His career began in the ’60s when, still a youth at St Benedict’s College, he’d play music with local dance combos. He then studied music in the UK and the US, before returning to make a music career in the Caribbean. He toured Europe, North Africa and the Caribbean for ten years in the 1980s with pop star Eddy Grant, and subsequently performed either as a leader or an accompanying musician in regional and international concerts and festivals. He has played with well-known artistes such as the Louisiana-born saxophonist Branford Marsalis, jazz-fusion saxophonist Grover Washington Jnr from New York and Boston-born jazz drummer Roy Haynes. Robertson has also arranged and judged pan music, and today continues to compose and play music, while also teaching music at the Tunapuna-based Birdsong Academy." http://repeatingislands.com/2015/12/09/trinidadian-jazz-pioneer-raf-robertson-dies/

Pan in Harmony on Branches by Raf Robertson

Pan in A minor on Branches by Raf Robertson

Melda on Majesty by Raf Robertson

Night and Day on Branches by Raf Robertson

Life Is a Stage on Majesty by Raf Robertson

Margie on Branches by Raf Robertson

Margie the Confrontation on Majesty by Raf Robertson

Culture on Majesty by Raf Robertson