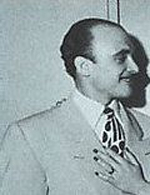 Lyricist, born 5 September 1912 in Hartford, Connecticut, died 3 March 1976 in Los Angeles, California. Active as a songwriter since the 1940s, he wrote the lyrics to many songs for Walt Disney movies. His best known song is probably 1948's Zip-A-Dee-Doo-Dah. Gilbert has also translated many of Antonio Carlos Jobim's (and other Latin-American artists) songs into English.