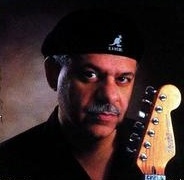 Smooth jazz guitarist Ray Obiedo was born and raised in Richmond, California, where as a child he frequently traveled to nearby San Francisco to take in free concerts by the likes of the Jimi Hendrix Experience and Cream; still, he did not pick up the guitar until age 17, also drawing considerable influence from acts including James Brown, Miles Davis, and Earth, Wind & Fire. At the outset of his career, Obiedo regularly shifted between jazz and R&B, working with a variety of artists including Herbie Hancock, Julian Priester, and Sheila E.; he also led the fusion unit Kick as well as the rock outfit Rhythmus 21. After signing to Windham Hill, Obiedo made his solo debut with 1989's Perfect Crime, followed two years later by Iguana; with 1993's Sticks and Stones, he reached the Top Ten on Billboard's Contemporary Jazz charts. After 1995's African-influenced Zulaya, he resurfaced two years later with Sweet Summer Days, and 1999 saw Obiedo move to the Domo label for the release of Modern World, a hybrid of R&B, pop, and Latin jazz. Owner of Werewolf Studio in Oakland, California.

Southern Side on There Goes That by Ray Obiedo

Avila on There Goes That by Ray Obiedo