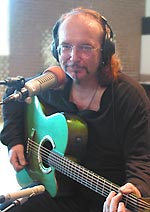 Reeves Gabrels (born June 4, 1956) is an American guitarist, songwriter and record producer. A member of British band The Cure since 2012, Gabrels is well known for his long partnership with singer David Bowie, with whom he worked regularly from 1987 to 1999, and with whom he was a member of the band Tin Machine. Throughout, Gabrels developed his own wide-ranging creative identity by performing, writing and recording independently and in collaboration with musicians worldwide. He has lived in New York, Boston, London and Los Angeles, and since 2006 he has been based in Nashville, Tennessee.

Husnu on The Sacred Squall Of Now by Reeves Gabrels

B.N.Y. on The Sacred Squall Of Now by Reeves Gabrels