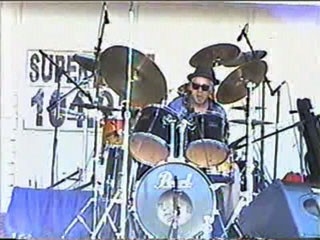 Drummer Born on 13.07.1948 Son of longtime Ellington sax player Paul Gonsalves. He was raised in Chicago and began playing drums in 1963. After spending time at Tennessee State University and playing in the marching band, he moved to New York and mostly listened to all of his idols including Max Roach, Elvin Jones, Tony Williams, Candy Finch, Roy Haynes, Art Blakey and many others. He moved back to Detroit in 1970 and worked with many artists in the Jazz and R&B field. From 1974 to 1979 he worked with Brainstorm and recorded 3 albums. From 1980 to 1987 he worked with Lyman Woodard. From 1987 to 1990, he worked with Alexander Zonjic's band. 1991 found him working with Bugs Beddow's band. He also spent time working in Windsor, Ont. working with many great canadian musicians playing R&B, Rock & Jazz including the Sheiks of R&B, The Buck Nasty Band and The Shades of Blue. He also played with Eddie Nuccilli's big band at the Montreux/Detroit Jazz festival in 1995. That same year, he began working with Etta James guitarist Bobby Murray. Since then, he has mostly freelanced with other Blues artists such as Johnnie Bassett, Keith Owens, Luther Keith and many others. Today, he continues to freelance playing a wide variety of music and learning more and more about music playing with such great players as Keith Vreeland and John Dana. He has had many influences playing with the likes of the late Dr. Teddy Harris, Rod Hicks, Robert Lowe and countless others. His father was sax player Paul Gonsalves and his mother, Harriet Browne, was a dancer and dance teacher in New York City and worked with the late Gregory Hines and Savion Glover, Sandman Sims and many others.